Production of Pacific white shrimp and Sarcocornia ambigua in a marine aquaponic system.

Aquaponics is the integration of aquaculture and hydroponics in a recirculating system. This production model has been successfully developed around the world using freshwater. However, in recent years and due to the development of the cultivation of salinity-tolerant plants, various studies have been carried out to evaluate the production of marine species coupled to halophyte plants.

Researches from the Federal University of Santa Catarina Brazil evaluated the integrated culture of Pacific white shrimp (Penaeus vannamei) and Sarcocornia ambigua in a marine aquaponic system with biofloc. The experimental system consisted of an 800 L culture tank, a 40L conical bottom chamber, and an NFT hydroponic system with 0.4 m2 of planting area. The shrimp culture was stocked at 250 shrimp m-3 and 40 plants were coupled in each system. The experiment was carried out for 74 days. 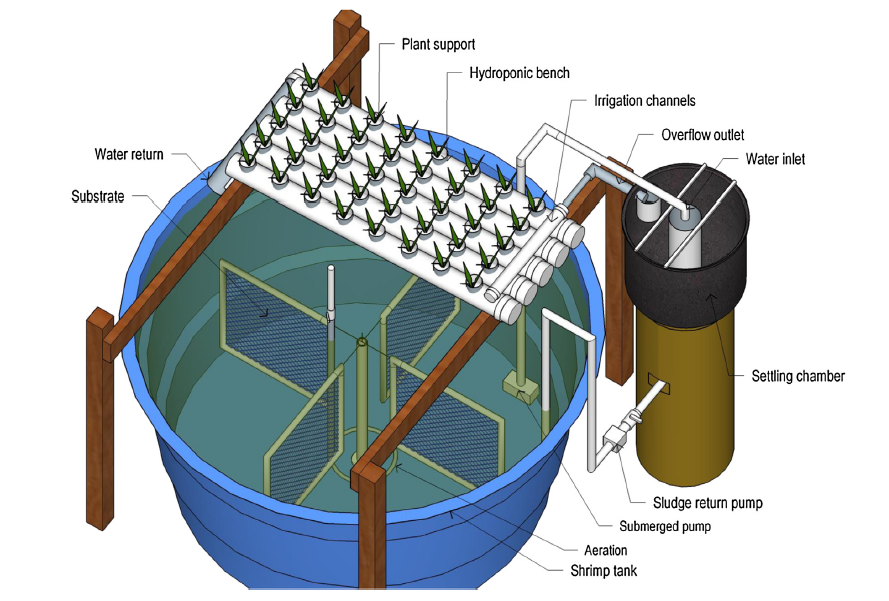 The final plant production obtained was 8.2 kg m-2 while the final shrimp biomass was 2.1 kg m-3. The water quality was maintained within the acceptable limits for marine shrimp culture. The recovery of nitrogen supplied to the aquaponic system was higher (39.3%) than a similar system without plants (31.4%).

The proposed system is capable to produce 2 kg of plants for each kilogram of shrimp produced. The present study shows the feasibility of produce shrimp and plants using marine water, while the use of nutrients is improved.