In recent years, the use of seaweed for the bioremediation of aquaculture effluents has increased. Several studies have shown the capacity of nutrient removal of different species of macroalgae and their potential for the integration in aquaculture systems as inorganic dissolved nutrients extractors. In this sense, a research team from China evaluated the nutrient uptake rate and a nutrient reduction efficiency of ammonium and phosphorus from scallop (Chlamys farreri) excretion by the seaweed Gracilaria lemaneiformis cultured in IMTA system in North China. The study was carried out in the Marine Aquaculture Laboratory of Institute of Oceanology., in Qingdao, for three weeks. Four macroalgae density were tested: 69.3 (T1), 139 (T2), 263 (T3) and 347 g m-3 (T4) meanwhile the stock density of scallops was the same in all treatments (409.9 g m-3). At the end of the experiment, the nutrient uptake rate and nutrient reduction efficiency (ammonium and phosphorus) were estimated. 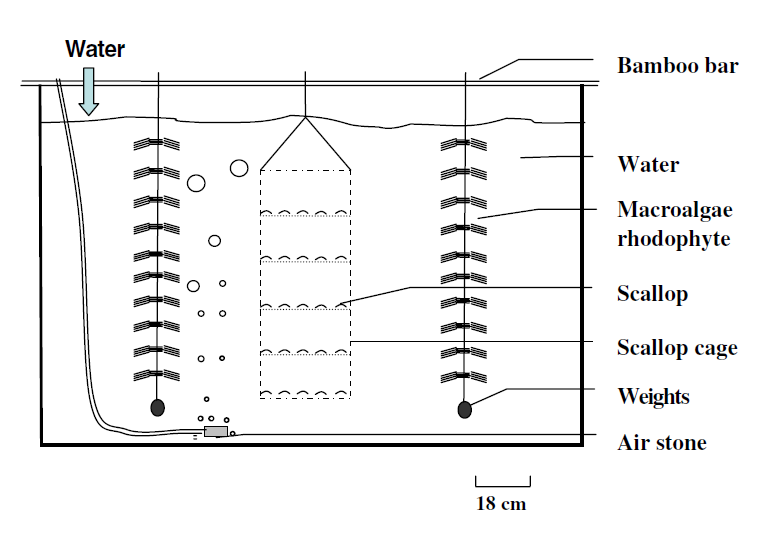 In this summary the ongoing situation and the potential for the practice of integrated multi-trophic aquaculture (IMTA) in the world’s marine temperate waters are highlighted. As is well known these days, IMTA in fact, is one of the most promising pathways in the evolution of sustainable aquaculture systems. Currently, most research is focused on biomitigation technologies and implemented within various aquaculture systems in order to minimize the impacts of excess nutrients on the surrounding areas. IMTA combines fed aquaculture species (e.g. finfish/shrimps) with organic extractive culture (e.g. suspension feeders/deposit feeders/herbivorous fish) and inorganic extractive species (e.g. seaweeds, halophytes) in such a way that waste produced by the fed culture becomes input for the extractive cultures. 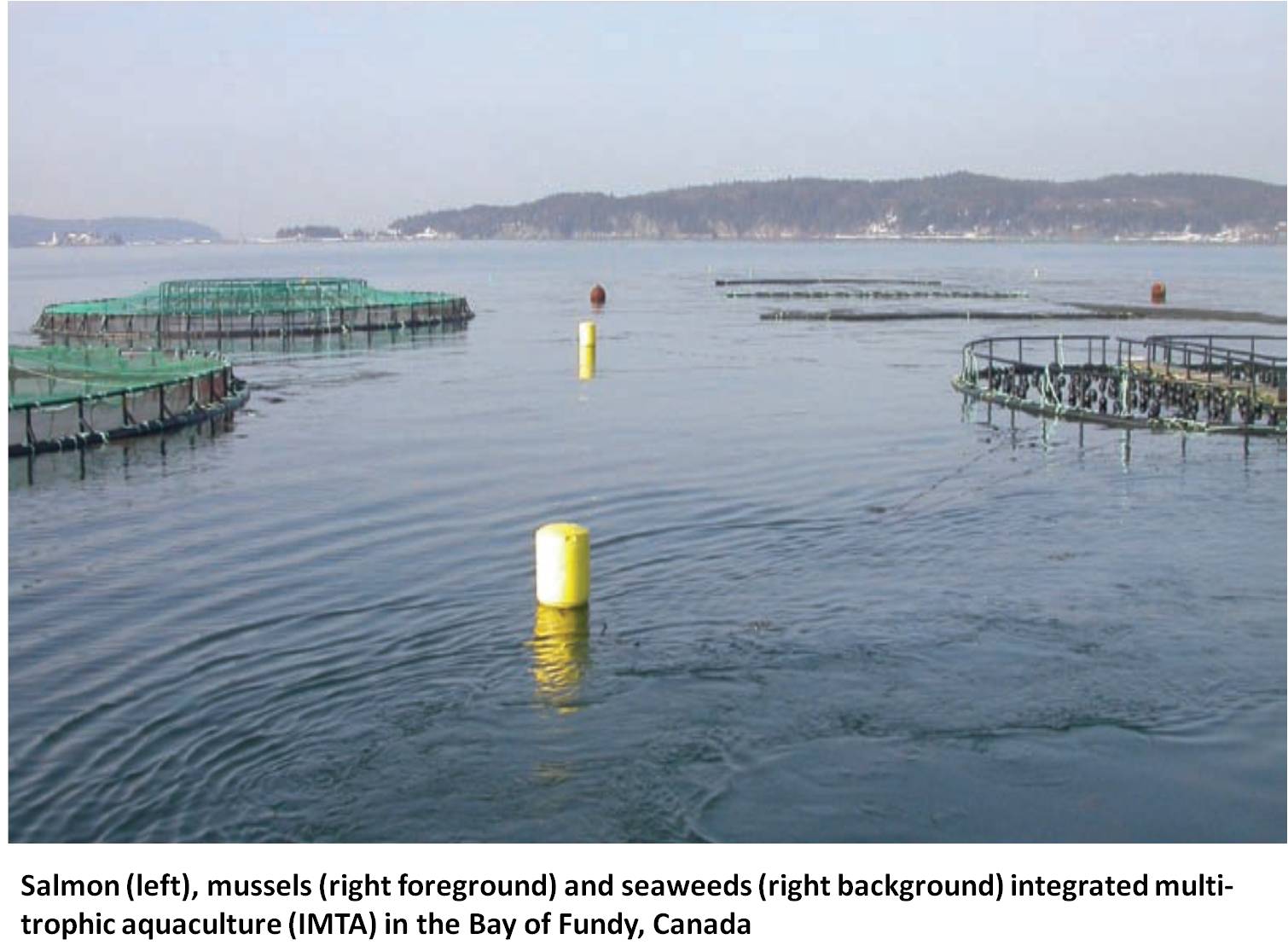 Certain measures and steps wherever appropriate should be taken in order to mitigate the practice of IMTA in these regions.

Considering all these aspects into account, IMTA can be used as a powerful and valuable tool towards structuring a sustainable aquaculture industry. IMTA systems can be ecologically efficient and environmentally benign.

Co-culture of sea bream and grey mullet in an Integrated Multi-Trophic Aquaculture system: a viable strategy to increase production and efficiency of the production model

Integrated Multi-Trophic Aquaculture (IMTA) is defined as a balanced system where the culture of fed organisms (mainly fish and shrimps) is combined with the culture of organic matter extractive species (shellfish, polychaetes, and holothurians) and dissolved inorganic nutrients extractive species (seaweeds). This production model transforms the waste produced by the traditional aquaculture into animal and vegetal biomass.

Researchers of the National Center of Mariculture (NCM) in Eliat, Israel, have conducted a study for evaluating the co-culture of flathead grey mullet (Mugil cephalus) and gilthead sea bream (Sparus aurata) in land-based IMTA system to assess the growth, survival, and efficiency on nitrogen assimilation of both species. Grey mullet and sea bream were cultured inthe same tank, sea breams were stocked in floating rectangular cages while grey mullet were stocked directly into the tanks. The sludge generated by seabreams serves as feed for the grey mullets. Parallelly, Sea bream and grey mullet were cultured by separate for comparative purposes. 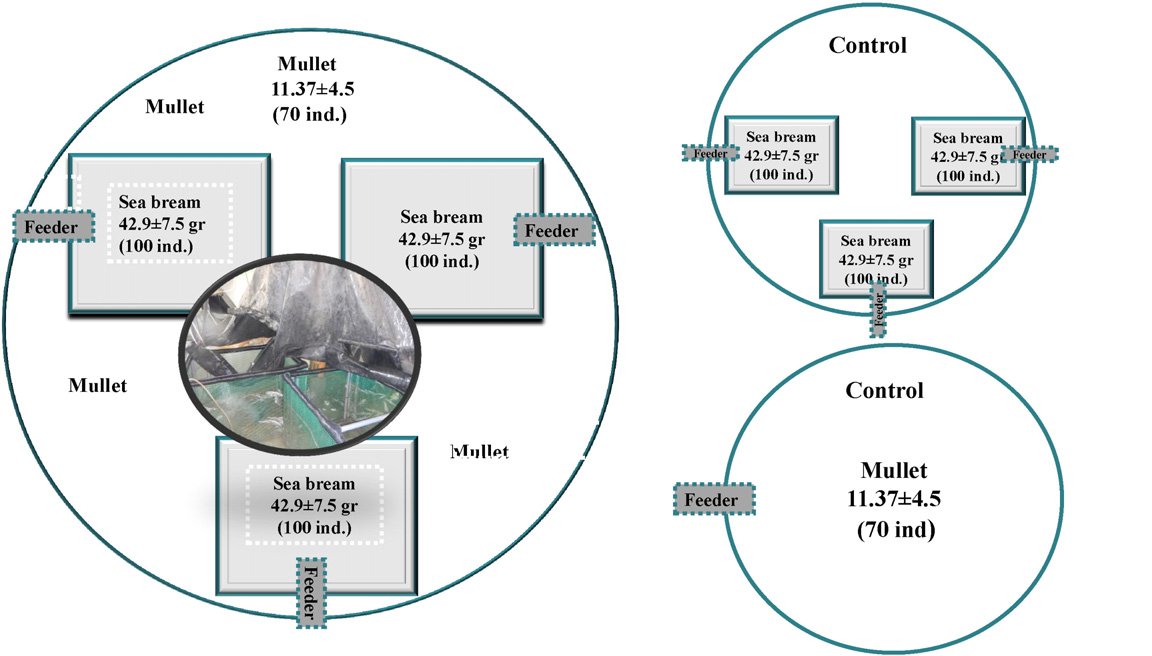 The growth and survival of sea bream cultured in co-culture tanks were similar to those cultured by separate. On the other hand, the performance of grey mullets cultured in co-culture was lower compared with those cultured by separate. However, from the overall point of view, the co-culture of sea bream and grey mullet increased the biomass of fish by 5.6-8.3%, increase the efficient assimilation of nitrogen by fish in 5.7-8.3%, reduced the feed factor conversion by 12-15% and reduced the amount of sludge by 85% and the amount of nitrogen in the sludge by 98%; nevertheless, the dissolved nitrogen emissions increase by 10%. In addition to the advantages mentioned above, the researches explain that the incorporation of grey mullet in co-culture into the IMTA presents two great advantages more: (i) the sludge treatment costs decrease and (ii) eventually the sales of grey mullet could generate an extra income for the farmers.

The economics of Integrated Multi-Trophic Aquaculture: where are we now and where do we need to go?

The Integrated multi-trophic aquaculture (IMTA), shows several benefits, such as:

Knowler and his colleagues in this paper, review aspects of IMTA’s economic potential and market acceptance. They find that adopting IMTA raises the "assimilative capacity" of the farm and reduces the environmental cost of aquaculture, subsequently. Moreover, integrating extractive species (e.g. invertebrates and/or seaweeds), with existing fed-monoculture operations, and increase farm profits. They bring out the presence of positive public attitudes towards IMTA, as a willingness to pay a premium for its products, can further increase the profitability of adopting IMTA. They also suggest fields requiring more economic research are the development of comparative bioeconomic models of IMTA and the evaluation of competitive production systems in order to demonstrate the true value of IMTA to society. In addition, they highlight the need for economic incentives, to foster adoption of IMTA, and the investigation of marketing opportunities, such as the eco-certification of IMTA products.
Their paper aims to inform economists and non-economists alike about the latest developments in IMTA economics and encourage further research on critical topics concerning this important subject.

For more details, see: Knowler et al. (2020) The economics of Integrated Multi‐Trophic Aquaculture: where are we now and where do we need to go? Reviews in Aquaculture, 1-16.

You can find SIMTAP Project also on Social Network.

To follow our Social Pages, simply click on the desired Social Network icon from the home page of the Site ("Follow us:") or through the following links: