The participation in this webinar is free. Participants are pleased to fill out the registration form by March 14th, 2021. 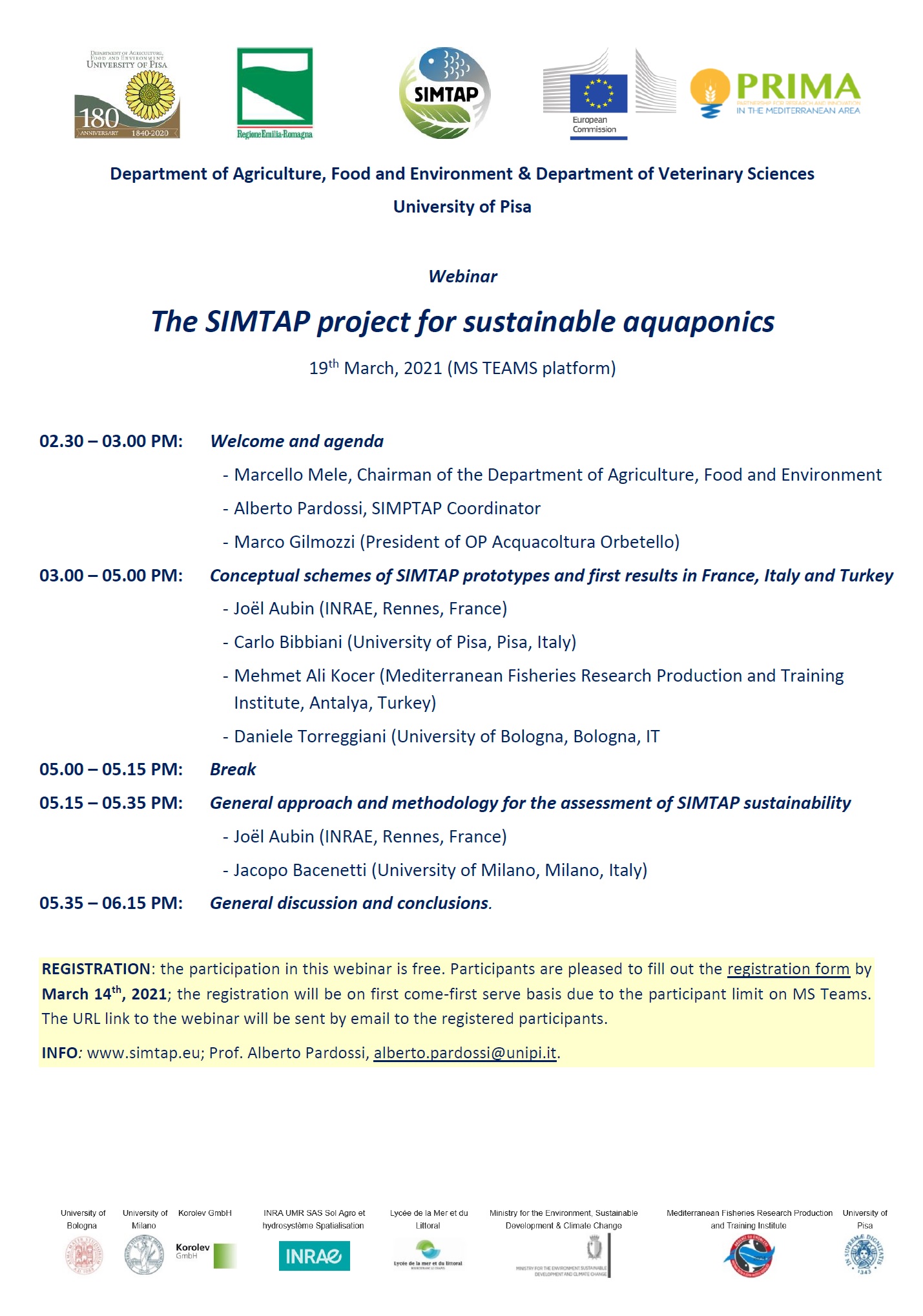 Growth and nutritional composition of the polychaete Hediste diversicolor (OF Müller, 1776) cultivated on waste from land-based salmon smolt aquaculture

In the aquaculture sector, wastewater generated is one of the main problems impacting the surrounding environment. Increased aquaculture production implies an increased in waste production and the relevance of these wastes is highly unexploited. Polychaetes might effectively consume these wastes and convert them into high-value nutritional biomass. In such a study exploring the uses of aquaculture generated-waste, the growth and nutritional composition of the polychaete worm Hediste diversicolor (O.F. Muller, 1776) were analyzed. In addition, the capability of H. diversicolor to utilize waste from land-based salmon smolt farms for growth and the nutritional composition of H. diversicolor cultivated on salmon smolt waste was evaluated. The worms were cultured for a period of 30 days and fed on iso-carbonic diets viz. fish feed, smolt waste, microalgae paste, and a 1:5 mixture (based on carbon content) of microalgae paste and smolt waste. It was found that H. diversicolor fed on fish feed grew significantly faster (wet weight basis) than worms grown on the other diets (SGR=0.025 d−1). The least growth was observed in worms fed with a mixture of smolt waste and microalgae (SGR=0.003 d−1). The groups fed on smolt waste and microalgae paste did not show any significant differences in their growths (0.012 d−1vs. 0.014 d−1, respectively). In all the treatments the lipid content ranged between 12 and 16% of DW, where polyunsaturated fatty acids (PUFA) comprise approximately 45% of the total fatty acids. The most abundant fatty acids in the worms were Palmitic acid (C16:0) and eicosapentaenoic acid (C20:5 n-3; EPA). The content of Docosahexaenoic acid (C20:6 n-3; DHA) was found to increase significantly from 1.5% to 4.6–7.8% of the total fatty acids during the experiment for all treatments. In all the treatments, the protein content ranged between 54 and 58% of DW, and the most abundant essential amino acids (EAA) were found to be lysine and leucine. Moreover, the authors calculated that 8% of the smolt production might be accounted for by the potential polychaete biomass produced via recycling smolt waste nutrients. On the whole, this study implies that not only H. diversicolor can be successfully reared on waste sludge from land-based salmon smolt aquaculture, but they also have the ability to convert and accumulate high valuable compounds. Therefore, they can be used to increase the protein and lipid availability and in parallel help in decreasing the harmful environmental impacts due to aquaculture practices.

Potential of two macroalgae as biofilters for integrated multi-trophic aquaculture

Two species of macroalgae (Undaria pinnatifida and Gracilaria vermiculophylla) collected from the Russian Far-East were evaluated in laboratory experiments to determine their potential as biofilters. For this purpose, their nutrient uptake potential and their physiological response to wastewater effluents from a maricultural rearing system (mussels’ culture) were measured.

8 g (fresh weight) of macroalgae were placed by replicate in 2 L containers with a continuous flow of wastewater. Water samples were taken to measure the ammonium- and phosphate concentrations and calculate the nutrient uptake rate. During the experiments, the temperature was maintained at 15°C, the irradiance was fixed at 130 µmol photons m-2 s-1, and the aeration was supplied continuously.

The results obtained indicated that both species of macroalgae can reduce the nutrient concentrations in the water (up to 70-90% of ammonium and 35-82% of phosphates). Besides, any negative effect on the growth and physiological conditions of both macroalgae species were found.

The study suggests that both species have great potential as a biofilter. Furthermore, the macroalgae species tested have great economic potential, being another good reason to use in IMTA.

For more details please visit: Skriptsova and Miroshnikova (2011). Laboratory experiment to determine the potential of two macroalgae from the Russian Far-East as biofilters for integrated multi-trophic aquaculture (IMTA). Bioresource Technology 102, 3149-3154.

Potential of the sea cucumber Cucumaria frondosa as extractive species for IMTA systems.

The absorption efficiency of the orange-footed sea cucumber Cucumaria frondosa was evaluated in order to examine its potential as organic-matter extractive species for IMTA systems. For this reason, laboratory and field trials were conducted. In the laboratory, the sea cucumbers were exposed to three different diets: (i) commercial algal diet of T-iso (Isochrysis galbana) or shellfish diet (mix of different microalgae), (ii) modified algae diet (a mixture of diatomaceous earth) and T-iso and (iii) mixture of particles found at local salmon farms. For the field trial, sea cucumbers were maintained in three different locations exposed to natural conditions.

The absorption efficiency estimated in the field trial was 70%, while in the laboratory trials ranged between 68 to 85%. Sea cucumbers were able to consume aquaculture waste in both kinds of experiments. The results obtained in the present study demonstrated that C. frondosa presents the capacity to reduce the organic matter from aquaculture wastes and it has the potential to be used as an organic-matter extractive species in IMTA systems.

Application of polychaetes in (de)coupled integrated aquaculture: production of a high-quality marine resource

Though the potential of polychaetes has not been fully investigated, they are known to function as organic extractive species in IMTA systems. Owing to the high levels of polyunsaturated fatty acids (PUFAs) found in several polychaetes species it is worthwhile to explore the practicability of employing polychaetes to convert fish farm waste into alternative resources for fish diet. Within this context, Nederlof and his team evaluate the potential of polychaetes Capitella sp. and Ophryotrocha craigsmithi to convert fish waste into valuable ingredients for fish feed formulation. The polychaetes were fed different forms of salmon feces (fresh, acid-preserved, or oven-dried) and their production rate as well as body composition, especially, fatty acid (FA) profiles were determined to evaluate their applicability in (de)coupled integrated multi-trophic aquaculture (IMTA) systems. Coupled production involves direct integration of polychaetes and fish within the same eco (system), whilst in decoupled production, the rearing units can be separated spatially or functionally. Preservation of fish waste is recommended in case of decouple system. The authors observed the highest growth rate in both species when fed with fresh feces, whilst a negative growth rate was observed in O. craigsmithi when fed with preserved diets. This in fact suggests the importance of microbial role in polychaetes’ diet. Despite relatively low content of PUFAs (5-9% of total FAs) in the diets, the fatty acid profile showed that both species were rich in PUFAs (>30% of total FAs). Moreover, all essential FAs needed for fish nutrition were also found. The FA profile was enriched in Capitella sp. when fed acid-preserved diets. The enriched levels of FAs found in both species might be accredited to the accumulation of PUFAs, de novo synthesis and/or transfer via bacterial biomass that could have led in the up-regulation of PUFA content. On the whole, the authors conclude that both species are highly valuable marine products that can be used as an alternative source for fish food formulations. Deducing from the recorded growth rates with different diets, O. craigsmithi seems more suitable for integration in coupled systems where fresh fish feces are continuously supplied, whilst Capitella sp. is interesting for both coupled and decoupled integrated systems as favourable growth was observed on all diets tested.

The formation, alteration, and maintenance of habitats by organisms through the production of physical structures or the transformation of existing ones is known as ecosystem engineering. In one of these cases, the role of Alitta virens (Sars) as an ecosystem engineer in pristine sediments was assessed. Nereidid polychaetes are able to exploit vacant niches and pristine sediments owing to their ability to swim, crawl, and burrow as well as to be carried passively by currents. They engineer their own environment by burrowing, feeding and respiring, and produce a diverse array of potential sedimentary and endobenthic habitats for other organisms. Changes in the burrowing behavior and modifications of the event beds by the burrowing nereidid were examined using laboratory microcosms with either abiotic sediments or organic-rich mud and pristine sand. In all the microcosms, modification of the environment by the nereidids to permit long-term residence was observed. Moreover, the nereidids demonstrate different behavioural strategies and burrow morphologies based on sediment characteristic and nutrient availability. Alitta virens used a variety of feeding strategy viz. scavenging, surface deposit feeding, suspension feeding, microbial gardening, deposit feeding at depth, and cannibalism. Many nereidids are known to employ suspension feeding using mucus but has never been documented before for A. virens. The extended use of suspension feeding may indicate low availability of biotic sediments for deposit feeding. Though A. virens characteristically produced burrows similar to Arenicolites and Skolithos, burrow morphologies similar to Polykladichnus, Planolites, Palaeophycus, and Thalassinoides were formed under differing sedimentary conditions and over different time scales. According to the rock record, such ichnological diversity might be interpreted as indicating paleoeco- logical diversity, rather than the response of one taxon to changing conditions. On the whole, Alitta virens is an allogenic ecosystem engineer, changing the physical and geochemical characters of its environment by its behaviour. These changes, combined with the widespread occurrence and population longevity of A. virens, demonstrate that burrowing polychaetes are important ecosystem engineers in shallow marine environments, and are likely to have been so over geological time scales.